It’s been less than two months since residents were ordered to stay home to curb the spread of the novel coronavirus. And it will be at least another two months before life starts to resemble normal again, according to a plan released Friday by Gov. Jay Inslee’s office.

Inslee announced that he’ll extend the stay-at-home order Monday, the day it’s set to expire, until at least May 31. But he also announced a phased plan that will slowly reopen public life across Washington state over the coming weeks and months.

“Cautious, well-informed relaxation will be critical,” Inslee said of the phased approach to lifting social-distancing orders.

The plan includes four phases, and offers 10 counties the option to ease restrictions sooner, pending approval from the state Department of Health. Those counties have “extremely low numbers of cases” of COVID-19, Inslee said in his address Friday, and they represent less than 3 percent of the population.

“I am very mindful of regional differences and impacts across the state with regard to the spread of COVID-19 and our response,” Inslee said. “Not every part of our state is experiencing this pandemic in the same way.”


Inslee noted that these counties should expect "broad acceptance" from the health department upon applying for variance, since they were essentially "pre-screened" for eligibility. "I don't expect that process will take long at all," he told reporters.

Statewide, residents already are experiencing Phase 1 of the gradual march toward normal. Inslee already has lifted some restrictions on low-risk construction projects, some outdoor recreation and elective surgeries. Completing this phase will involve developing protocols with industries to allow automobile sales, car washes, curbside pickup for retail and other low-impact commerce. Those guidelines are expected to be finalized mid-May, the governor said Friday.

Phase 2 would ease limitations further, offering the first opportunity for restaurants to welcome in-house guests with limited capacity. Barber shops and hair salons also would be allowed with health restrictions, as well as in-home services and new construction. And gatherings of no more than five people would be permitted.

Phase 3 would welcome non-essential travel, gatherings of 50 or fewer people, and more capacity at restaurants and recreational facilities. Bars, gyms and movie theaters could open with limited capacity. Government buildings could open, with remote work strongly encouraged, as well as museums and libraries. Nightclubs and events of more than 50 people still would be banned.

Phase 4, which is expected to most resemble pre-pandemic life, would essentially allow all businesses and public interaction to resume. While social distancing would still be encouraged, concerts and sporting events would be permitted.

Inslee stressed that all of these steps still will require some level of social distancing where possible and, of course, good hygiene. If the state loses any ground, and COVID-19 cases spike again, there’s a chance lifted restrictions could be rolled back.

And a true return to normal relies heavily on medical intervention, Inslee said, specifically development and distribution of a vaccine: "No one knows when we are going to get there.”

Still, Inslee said Friday that all indicators show Washington’s approach is working: experts say there’s continued evidence that we’re suppressing the spread of the respiratory disease, and transmission rates are down in central Puget Sound.

He reiterated that a confluence of many metrics will determine how the state moves through each phase of this detailed plan and “how far we turn these dials.”

“We’ll have three weeks at least — at least — between phases,” Inslee said.

Three weeks from now is the end of May; three weeks after that, the middle of June. That means the soonest Washington can see the return of unrestricted public interaction is early July, if COVID-19 metrics continue to trend positively and Washington residents continue to follow public health orders.

“This is a precarious situation and we can’t be lulled into a sense of ultimate success,” Inslee said. “Like a skydiver with an open parachute, the spread of this disease is taking a slow descent.”

Eventually, Inslee says, our feet will touch the ground. But in the meantime, we need to stay committed to the gradual steps to get there. 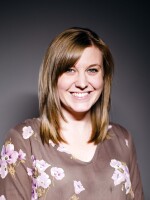 Kari Plog
Kari Plog is an eager newcomer to public radio and a longtime admirer. Her background as a print journalist started at The News Tribune in Tacoma, where she covered government and communities across Pierce County. Her work included an award-winning investigation into a deadly boat launch in Tacoma.
See stories by Kari Plog